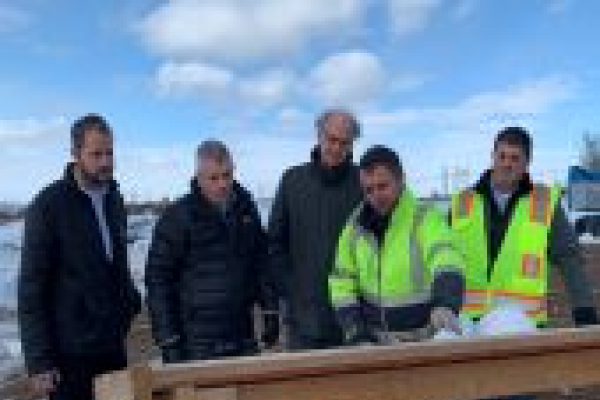 Progress continues at the Marcy Nanosite, where investments made by Oneida County resulted in a $1 billion public-private partnership with Cree Inc. that will transform the economy of the region.

County Executive Anthony J. Picente Jr. and officials from Cree toured the site on Wednesday with Empire State Development Chairman Howard Zemsky to show him the progress being made on the company’s Mohawk Valley Fab facility.

“Since the project’s announcement in September, it has been full speed ahead on getting this facility up and running and filling the hundreds of well-paying jobs that will come along with it,” Picente said. “Oneida County has been dedicated to supporting this site since day one, and our commitment continues as we give Cree all the tools it needs to be successful in this venture.”

Oneida County recently approved bonding up to $7 million to fund a construction project to improve access to the site through the SUNY-Marcy Parkway. Between the county, Mohawk Valley EDGE and the State of New York, more than $100 million in infrastructure improvements have been made for the nanocenter.

Earlier this month the project’s general contractor Exyte U.S. submitted a site plan to the Town of Marcy that calls for three primary buildings to be located on the 56.25 acres at the northern end of the 398-acre nanocenter site. The buildings are expected to be finished and ready for the installation of tools by April 2021. The site also has room for two more fabrication facilities which Cree has expressed interest in exploring.

On Wednesday, Picente went over the site plans with Zemsky and showed him the preparation work being done on the structures’ foundations that are slated to begin by the end of the month.

The state-of-the-art, highly-automated 200mm silicon carbide wafer fabrication facility will be the first of its kind, and is forecast to bring 614 jobs with an average salary of $75,000 to Oneida County.

An Empire State Development economic analysis study found that over the next 20 years, the project is estimated to create 1,188 net new direct and indirect full-time jobs, 2,752 construction jobs during each year of construction, over $232 million in new state and local tax revenue and more than $4.3 billion in total statewide economic impact.