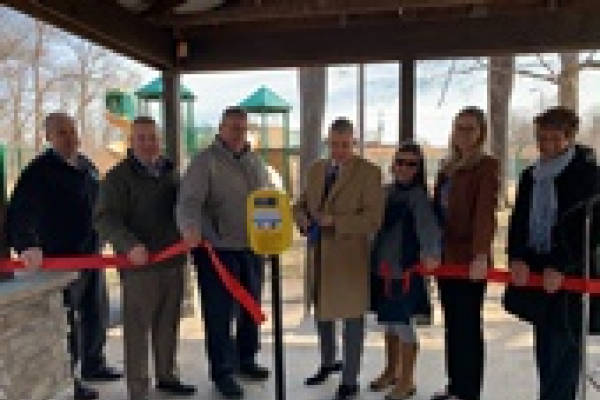 Picente, Oneida County Director of Health Phyllis D. Ellis, BSN, MS, F.A.C.H.E, and Sherrill City Mayor William Vineall announced five public sunscreen dispensers will be available at Robertson Park, the Al Glover Pool, Sherrill Community Activity Center, the Department of Public Works building and the City Power and Light building. The dispensers will be available to all residents and visitors as a way to encourage use and protection from harmful ultra violet rays.

“Protection is prevention,” Picente said. “Each of these dispensers will be placed in areas to provide accessible and important protection for children, families and the city’s employees who work outdoors year-round.”

While many people think sunscreen is only for the beach, officials remind residents to protect themselves from UV rays all year, including cloudy days and in the winter, when approximately 80 percent of the sun’s harsh effects can still be felt. According to health officials, five or more sunburns in the course of a lifetime doubles the risk of melanoma.

The sunscreen dispensers are part of the Health Department’s Cancer Prevention in Action Program, which also includes providing a protective sunshade structure at the playground at McAllister Elementary School in the City of Sherrill.

“Cancer is the second leading cause of death in New York State, the nation and globally,” Ellis said. “Whenever possible, we work toward prevention. These sun safety efforts in Sherrill are forward-thinking public prevention steps we would like to see in other communities.”

“The City of Sherrill is honored to be the first municipality in Oneida County to participate in this program,” said Sherrill City Mayor William Vineall. “The Health Department and its employees have been great stewards for this program, and have been strong advocates for cancer prevention in our area. The City of Sherrill appreciates County Executive Picente’s vision for promoting health and wellness throughout the County, and we are thankful for his continued support here in Sherrill”

Sherrill will serve as the pilot city for the program and the hope is to expand similar initiatives to other areas of the county.