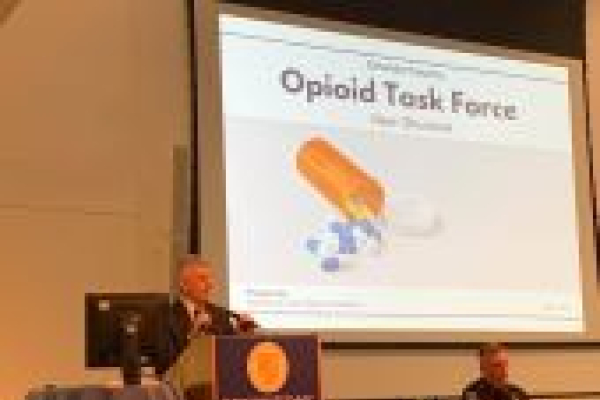 UTICA — The Oneida County Opioid Task Force held a summit at SUNY Polytechnic Institute on Dec. 4 at which it announced its new structure and the utilization of recently-obtained grant funding.

“The Oneida County Opioid Task Force has been having an immense impact on this scourge that has plagued our community,” Picente said. “The current moment lends itself to greater stakeholder involvement and collaboration in attacking the opioid epidemic. The restructuring of our Task Force will maximize cross-sector engagement, and utilize a holistic approach that employs evidence-based strategies and practices informed by people with substance use disorder to produce even greater results.”

Originally formed in 2016, the Opioid Task Force will continue to be overseen by a steering committee, but will now include subgroups comprised of a prevention, recovery and treatment enhancement teams. The Oneida County Overdose Response Team will also be included as a Task Force subgroup.

The Opioid Task Force is a large cross-sector partnership of community partners that meets quarterly and is specifically focused on addressing the opioid epidemic. This group is open to all agencies to participate and provides opportunity for interested individuals to become actively engaged in Task Force team projects. Its duties include:

The Steering Committee is made up of a group of key influential leaders, team chairs and community members that will provide direction and guidance to the larger Opioid Task Force. Its duties include:

The Prevention Team is a subgroup of Task Force members that implements prevention-specific strategies specifically targeted at non-drug users to promote and reinforce abstinence. Its goal is to prevent opioid use and misuse by developing prevention education strategies targeted at non-users and school age youth.

The Treatment Enhancement Team is a subgroup of Task Force members that implements strategies to increase access to treatment services and promotes harm-reduction practices. Its goal is to enhance and expand treatment services for people

with Opioid Use Disorder by increasing access to Medication Assisted Treatment.

The Overdose Response Team is a subgroup of Task Force members that implements opioid overdose surveillance using ODMAP, deploys peer recovery specialists to overdose victims, identifies spikes and issues spike alerts to notify the community and mobilize Task Force response. It will also be including a small data-focused sub-team. Its goal is to monitor overdoses and mobilize cross-systems response by increasing qualitative and quantitative data sources and overdose reporting.

In September, Oneida County was one of six communities to receive a two-year $600,000 grant from the U.S. Bureau of Justice Assistance and the Centers for Disease Control and Prevention to support data-driven responses to emerging drug threats. The county will match the funding.

The Opioid Task Force is currently using the grant for data collection and analyzation. After six months of data is amassed, rapid response strategies will be developed based on the findings.