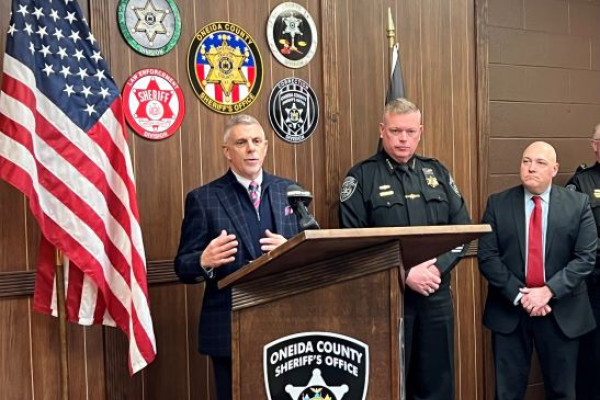 Oneida County Executive Anthony J. Picente Jr., Sheriff Robert Maciol and District Attorney Scott McNamara today announced the integration of a new and innovative drug detection device at the county’s correctional facility, the first in the state to do so.

Known as the MX908, the tool can reliably detect trace-levels of a broad range of drugs in seconds and is used by many U.S. law enforcement agencies for drug testing in the field and to identify trace amounts of illicit drugs smuggled into correctional facilities.

“This advanced technology gives us the capability to positively identify even residual amounts of drugs in seconds and can be a game-changer in a rapidly changing drug threat environment,” Picente said. “The device supports first responder safety by allowing them to identify drug exposures and take appropriate precautions, improving evidence for drug investigations and enhancing our public health surveillance activities to help understand and combat emerging drug threats in our community, including any illicit drugs entering our correctional facility.”

Oneida County will be the first correctional facility in New York State to use the MX908 device to detect drug contraband and to collect data findings to support its Opioid Task Force Overdose Response Team’s drug trend surveillance program. The device was purchased with the county Health Department’s Bureau of Justice Assistance and CDC Partnerships to Support Data-Driven Responses to Emerging Drug Threats grant, which promotes public health and law enforcement collaborations that advance a shared understanding of patterns and characteristics of local problem drug use.

“Corrections Officers today are facing more dangers than ever and I have an obligation to ensure that we are doing all that we can to protect our officers, Maciol said. “I am grateful to County Executive Picente for once again securing the funding for this state-of-the-art device that will be able to detect dangerous and sometimes fatal contraband coming in through the mail.”

“The Oneida County Opioid Task Force continues to fight the scourge of drugs in our community on multiple fronts, and I am proud to be a co-chair along with County Executive Picente and Sheriff Maciol,” McNamara said. “This latest tool will help safeguard the jail and assist my office in drug investigation cases.”

908 Devices Inc. is a pioneer of purpose-built handheld and desktop mass spectrometry devices for chemical and biomolecular analysis. MX908 uses patented technology that is the only handheld high-pressure mass spectrometry™ on the market for use in public safety. It’s capable of analyzing gas/vapor, solid/liquid and aerosol samples, and with simple swabbing, can identify most drugs of abuse, including more than 2,000 novel fentanyl analogs and even mixtures of street drugs that contain cutting agents.

“We are proud to support the Oneida County Sheriff’s Office and provide trace detection and identification of suspected drugs, such as fentanyl, for law enforcement and corrections applications,” said John Kenneweg, Vice President of Government for 908 Devices Inc. “We developed the MX908 handheld device to provide first responders with quick and accurate results at the point of need, while keeping officers safe.”