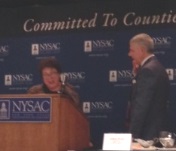 County delegates from across the state today unanimously elected Oneida County Executive Anthony J. Picente, Jr. as the next president of the New York State Association of Counties (NYSAC). The election was part of NYSAC’s Annual Fall Seminar and educational program help in Erie County from September 22-24, 2014.

“I am honored to be chosen by my county peers from across the state and I am committed to working with all of them as we collectively redesign and strengthen the role of local government in New York,” said County Executive Picente, who was sworn in by Hon. RoAnn Destito, State Commissioner of the Office of General Services and former State Assemblywoman from Oneida County.

Over six hundred delegates from across the state gathered at the Buffalo Convention Center for the event. The county leaders focused on topics such as emergency preparedness, age friendly communities, preschool special education, workforce training, the heroin epidemic, economic development opportunities, landbanks, and procurement.

“Tony will make a great NYSAC president, and he is more than up for the challenges facing county leaders, who are the front lines of serving New Yorkers, and strengthening the quality of life in our communities,” said Immediate Past President Mark Alger, Steuben County Manager.

“I congratulate Oneida County Executive Anthony J. Picente, Jr. on his election to NYSAC President.  This is an important statewide position and the state and local experience Anthony brings to this role will assist policy makers from across New York’s governmental spectrum. I look forward to continuing our work together to lower taxes, create jobs and make New York a better place to live, work and raise a family,” said Senator Joseph Griffo.

“County Executive Picente leads by example. He has the best interest of our community in mind with every decision he makes. His knowledge of state and local government will serve the association well. I looking forward to working with the County Executive to strengthen the county state partnership in the coming year,” said Anthony Brindisi.

The New York State Association of Counties is a bipartisan municipal association serving all 62 counties of New York State including the City of New York. Organized in 1925, NYSAC's mission is to represent, educate and advocate for member counties and the thousands of elected and appointed county officials who serve the public.