Deputy Sheriff Kurt Wyman, 24, was shot and killed in the line of duty 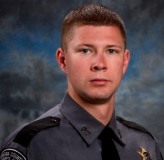 At approximately 8:08 p.m. on June 6, 2011, Deputy Wyman and Deputy Mark Chrysler were dispatched by the 911 center to a domestic incident at Christian Patterson’s residence at 5488 Knoxboro Road, Town of Augusta. During the domestic dispute Patterson threatened to kill his live-in girlfriend, Shannon Secor, and himself.  Secor fled the residence and was aided by a neighbor. Deputy Wyman, Investigator David Nowakowski and Sgt. Robert Nelson negotiated with Christian Patterson, (D.O.B. November 23, 1970), for approximately six (6) hours. Patterson armed with a shotgun refused to surrender and made numerous statements that led the deputies to believe that he was going to cause harm to himself. At approximately 2:00 a.m., as deputies attempted to take him into custody, Patterson shot and killed Deputy Wyman and shot at investigator David Nowakowski. Thereafter three (3) members of the Sheriff’s Office returned fire. Patterson was wounded and is currently at St. Elizabeth’s Hospital.
Deputy Wyman has been a member of the Sheriff’s Office since October 11, 2007. Deputy Wyman was a two time recipient of the Oneida County Sheriff’s Grand Cordon Medal and received the Oneida County Sheriff’s Rookie of the Year Award in 2010. He was active in the United States Marine Corps Reserves as a Corporal. On May 1, 2008, Deputy Wyman was activated for military duty and served in Iraq. Upon returning from military service Deputy Wyman worked at the Waterville field office. Deputy Wyman is survived by his wife Lauren and his 18 month old son. They are expecting their second child. He is also survived by his mother, father, and sister.