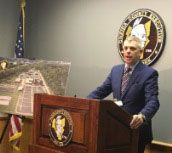 Over the past 11 years, Oneida County Sewer District (OCSD) representatives, engineers and member municipalities have worked diligently to identify and implement a cost-efficient strategy to rehabilitate their aging sanitary sewer system.

Extensive camera inspection of the sewer pipe system and assessments of the pumps and treatment facilities have shown that fixing the system would be a major undertaking, costing more than $330 million at its conclusion.

Given the level of work completed to date, and additional work needed, customers will soon begin to see yearly OCSD rate increases. However, County and OCSD leadership announced today that OCSD will tap a reserve fund to help reduce the impact of the rate increase on District customers. The reserve is the result of a prudent saving practice that ensures the OCSD is able to respond to both unexpected and anticipated future system needs.

“We’ve taken on the task of repairing a system that went far too long without the necessary investments and maintenance,” said Oneida County Executive Anthony J. Picente Jr. “Our approach has been strategic and collaborative, as we have worked for years with a Steering Committee, representative of all District municipalities, to set a course for efficient and responsible methods of repair. As such, I’m pleased to announce that the OCSD has been able to use funds saved over recent years to cut the impact of this first rate increase by half. This assistance will greatly reduce the burden to ratepayers in 2018.”

In April 2018, OCSD ratepayers can expect to see an annual increase of $4.13 per 1,000 gallons of consumption to $4.52 per 1,000 gallons to pay for the first round of work completed at the OCSD Water Pollution Control Plant (treatment plant).

On average, for the OCSD portion of sewage bills, this equates to an annual increase of:

“We knew that when it came time to start paying back the debt service on these facility improvements and upgrades that there would be an impact on the ratepayers,” said Steven P. Devan, P.E., Commissioner, Oneida County Department of Water Quality and Water Pollution Control. “With this in mind, we were conservative in our spending and saved our surpluses to be able to help make the increases more gradual and manageable.”

The rates residents pay fund the improvements that:

• Assist the City of Utica with treatment elements of its Long-Term Control Plan by increasing wet weather treatment capacity at the Water Pollution Control Plant.

“With these investments, all OCSD residents can have the peace of mind that we will avoid catastrophic system failure,” Picente said. “In addition, we are setting in place the mechanisms to ensure the ongoing maintenance of the system in the future, including the formation of a shared services plan to minimize the burden on District communities.”

In addition to the OCSD rate, customers may have an additional municipal rate to fund local sewer system repairs and improvements. Those rates would be determined at the city, town and village level.

Just because you don’t see it doesn’t mean there isn’t a problem. Normally, our Oneida County Sewer District (OCSD) sanitary sewer system has enough capacity to operate properly. But when we experience heavy rains or snowmelts, the sanitary sewer system becomes overwhelmed with clean stormwater, which causes overflows into the Mohawk River. In some cases, residents can even experience backups into their homes or overflows onto the street.

Since 2007, a Steering Committee, consisting of representatives from each of the 15 District municipalities, has participated in developing the three-part fix to this problem: (1) fix aging and failing sanitary sewer pipes; (2) remove stormwater and other materials from the sewers to maintain capacity; and (3) upgrade treatment and pumping facilities.