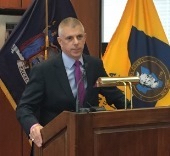 Oneida County Executive Anthony J. Picente Jr. unveiled his 2018 proposed county budget and capital plan on Thursday in an address to the County Board of Legislators.

The $407.8 million budget proposal included a balanced budget that does not include a raise in the property tax levy for the fifth year in a row. The address included expanded programs for libraries, a veterans legal clinic and a reorganizing the Department of Social Services’ legal department.

“This budget proposal has only 0.6 percent discretionary growth, and in total, over the past five years, the county budget has barely grown two percent,” Picente said. “This fiscally conservative approach has allowed us to run government for five years in a row without raising taxes while investing heavily in this community.”

Included in the County Executive’s capital plan is a 6-year $12 million flood mitigation program aimed at reducing risk for residents and businesses and $1.7 million to expand the 911 Emergency Operations Center in Oriskany.

“Our capital plan retires nearly $1 million in overall debt while still repairing roads, building bridges and investing in vital government infrastructure,” Picente said. “We have also been able to put together a multi-year program that will assist communities to mitigate the devastating damages caused by flooding.”