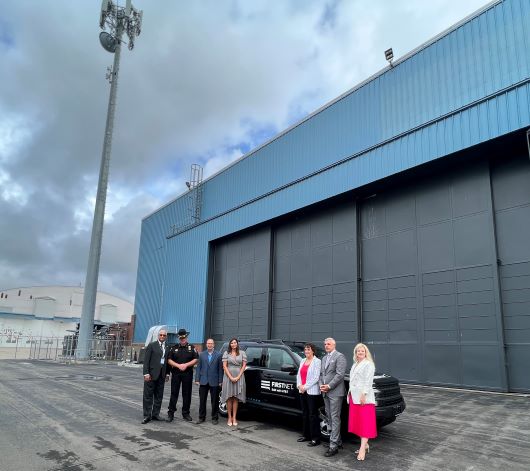 Oneida County’s first responders are getting a major boost in their wireless communications thanks to the FirstNet® network expansion currently underway by AT&T*. New purpose-built cell sites have been added in Oneida County – one in the City of Rome, another by Hinckley Reservoir on the Herkimer County border. These new sites are giving first responders on FirstNet – America’s public safety network – access to always-on, 24-hours-a-day priority and preemption across voice and data. Today, AT&T significantly covers Oneida County and New York with FirstNet, Built with AT&T – helping to connect public safety agencies and organizations in more than 340 communities across the state.

AT&T has built and launched more than 15 new cell sites in Oneida County since 2020, with more than five being FirstNet, purpose-built sites. Only one other county has had more new cell sites launched in the Empire State over the past two years. Recognizing the need for enhanced connectivity, faster wireless broadband and better public safety communications, County Executive Anthony J. Picente Jr. formed a strategic public/private collaboration with AT&T in 2016 to identify ways to provide better service to first responders, residents and businesses across the county. When AT&T was selected to build the FirstNet network, Oneida County saw the immense benefits and adopted it for all its public safety and county emergency service needs.

During the event, Mayor Izzo announced that the city officially adopted FirstNet for all its municipal communications to help provide better services and public safety. Additionally, the Rome Police Department, Fire Department and Public Works, and all emergency services have all adopted FirstNet. Rome’s first responders now have priority access to FirstNet’s entire public safety ecosystem of mission-ready tools and capabilities, including:

Why is this important? We consider FirstNet the most important wireless network in the country because it serves our first responders. And unlike commercial networks, FirstNet provides dedicated mobile broadband. To ensure AT&T and the First Responder Network Authority (FirstNet Authority) are putting coverage and capacity where first responders need it most, the FirstNet build is guided by direct feedback from state and public safety officials. This helps ensure New York first responders connect to the critical information they need – every day and in every emergency.

What are the benefits to first responders? From 2019 to 2021, AT&T invested more than $1.6 billion in our New York wireless and wired networks and actively extended the reach of FirstNet to give agencies large and small the reliable, priority connectivity and modern communications tools they need. These sites were constructed using Band 14 spectrum, as well as AT&T commercial spectrum. Band 14 is nationwide, high-quality spectrum set aside by the government specifically for FirstNet. We look at Band 14 as public safety’s VIP lane. In an emergency, this band – or lane – can be cleared and locked just for FirstNet subscribers. That means only those on the FirstNet network will be able to access Band 14 spectrum, further elevating their connected experience and emergency response.

What is FirstNet? FirstNet is the only nationwide, high-speed broadband communications platform dedicated to and purpose-built for America’s first responders and the extended public safety community. Shaped by the vision of Congress and the first responder community following the 9/11 terrorist attacks, FirstNet stands above commercial offerings. It is built with AT&T in public-private partnership with the First Responder Network Authority – an independent agency within the federal government. The FirstNet network provides public safety with truly dedicated coverage and capacity when they need it, including unique benefits like always-on priority and preemption, and high-quality Band 14 spectrum. These advanced capabilities enable FirstNet to help fire, EMS, EMA, law enforcement and 9-1-1 personnel save lives and protect their communities.

What people are saying:

“The FirstNet network has made Oneida County a safer place. Our partnership with AT&T has provided our first responders with fast and reliable communication that makes all the difference in serving the public and saving lives. We are also thankful for the immense investment they have made to improve the county’s mobile coverage and to bridge the digital divide for our residents.”

“AT&T’s FirstNet service has greatly enhanced our public safety response operations. With always-on priority, preemption and dedicated coverage, our first responders have access to a better, faster communications network that is essential in a time of crisis. AT&T’s push to talk service has become a vital part of our operations especially when our first responders may be outside of traditional cell coverage areas or public safety radio tower signals have a difficult time transmitting a signal especially in the outside district or the signal being unable to penetrate through concrete block buildings. This service provides a constant line of communication in an emergency situation, and we thank AT&T and the First Authority for making this investment in the City of Rome.

“I am pleased that AT&T has enhanced public safety in Rome and Oneida County by building out its emergency services communications system and will be investing in its wireless network in the region. This new infrastructure will improve connectivity, provide additional access to reliable wireless and broadband services and will benefit area residents, visitors and business owners.”

“Communication is a key component of public safety. I appreciate the work that has been done to ensure that our first responders have this important tool when assisting those in need. Thank you to all that assisted in bringing this much needed infrastructure to Oneida County.”

“New York’s and Oneida County first responders deserve reliable coverage across the state to help them effectively and efficiently address incidents. And with FirstNet, that’s exactly what they’re getting. We have a responsibility unlike any other network provider, and couldn’t be more pleased to support the public safety mission by bringing regional first responders – and residents – greater access to the connectivity they need. We are proud of our work with County Executive Picente over the years to better connect Oneida and honored that Mayor Izzo chose FirstNet to elevate Rome’s public safety communications capabilities.“

Lisa Casias, Acting CEO, FirstNet Authority
“FirstNet is a dedicated broadband platform for public safety, by public safety. We worked hand-in-hand with public safety throughout New York to understand their needs for the network. This new infrastructure is a prime example of how that input and feedback are becoming reality. We look forward to continue supporting Rome and Oneida County first responders’ use of FirstNet to help them save lives and protect our communities.”